Because of the less-than-robust response to therapy and impact on choice of optimal chemotherapy and prognosis, chronic kidney disease has drawn attention in the treatment of multiple myeloma, a malignant hematologic disorder that can produce significant amounts of monoclonal immunoglobulin free light chains (FLCs). These low-molecular-weight proteins are relatively freely filtered through the glomerulus and are reabsorbed by the proximal tubule. The present study demonstrated that during the process of metabolism of immunoglobulin FLCs, ROS activated the STAT1 pathway in proximal tubule epithelium. STAT1 activation served as the seminal signaling molecule that produced the proinflammatory molecule IL-1β, as well as the profibrotic agent TGF-β by this portion of the nephron. These effects occurred in vivo and were produced specifically by the generation of hydrogen peroxide by the VL domain of the light chain. To the extent that the experiments reflect the human condition, these studies offer insights into the pathogenesis of progressive kidney failure in the setting of lymphoproliferative disorders, such as multiple myeloma, that feature increased circulating levels of monoclonal immunoglobulin fragments that require metabolism by the kidney.

DMTU inhibited the FLC-mediated activation of STAT1 in HK-2 cells. 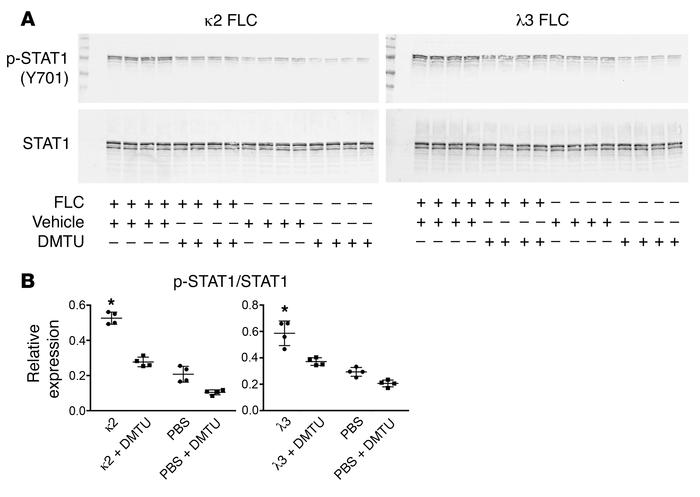