Insulin-dependent type 1 diabetes is an autoimmune disease mediated by T lymphocytes recognizing pancreatic islet cell antigens. Glutamic acid decarboxylase 65 (GAD65) appears to be an important autoantigen in the disease. However, T cells from both patients with type 1 diabetes and healthy subjects vigorously proliferate in response to GAD65 stimulation ex vivo, leading us to postulate that the critical event in the onset of human diabetes is the activation of autoreactive T cells. Thus, we investigated whether GAD65-reactive T cells in patients with diabetes functioned as previously activated memory T cells, no longer requiring a second, costimulatory signal for clonal expansion. We found that in patients with new-onset type 1 diabetes, GAD65-reactive T cells were strikingly less dependent on CD28 and B7-1 costimulation to enter into cell cycle and proliferate than were equivalent cells derived from healthy controls. We hypothesize that these autoreactive T cells have been activated in vivo and have differentiated into memory cells, suggesting a pathogenic role in type 1 diabetes. In addition, we observed different effects with selective blockade of either B7-1 or B7-2 molecules; B7-1 appears to deliver a negative signal by engaging CTLA-4, while B7-2 engagement of CD28 upregulates T cell proliferation and cytokine secretion. 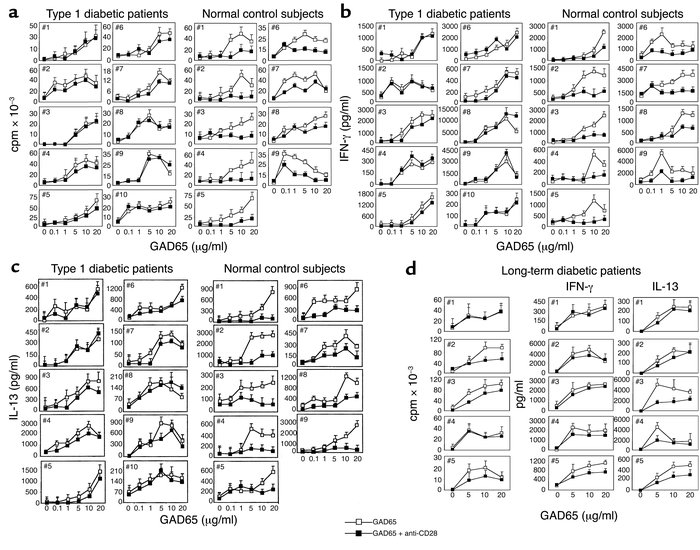 Response to GAD65 in individual type 1 diabetes patients and normal control subjects with blocking costimulatory signals. PBMCs from type 1 diabetes patients and normal control subjects were cultured with different concentrations of GAD65 (0.1–20 μg/ml) or TT (0.01–1 Lf/ml) in the presence or absence of anti-CD28 F(ab′) fragments. After 5 days of culture, rhIL-2 was added to each of ten replicates established for each antigen concentration with or without blocking Ab’s. After an additional 5–7 days of culture, supernatants were collected for cytokine detection, and proliferation was assessed by [3H]thymidine incorporation. () T cell proliferation in 19 separate experiments. Each symbol represents the mean thymidine uptake of ten replicate cultures ± SE, stimulated only with the antigen (open squares) or with antigen plus anti–CD28 F(ab′) fragment (filled squares). T cells from both patients and controls proliferated in response to GAD65, and blockade of CD28 costimulatory pathway inhibited GAD65 proliferation and ( and ) cytokine secretion in healthy subjects but not in patients with type 1 diabetes. A summary of all the new-onset patients and controls is shown in Figure . () Proliferation and cytokine secretion in five long-term diabetic patients.